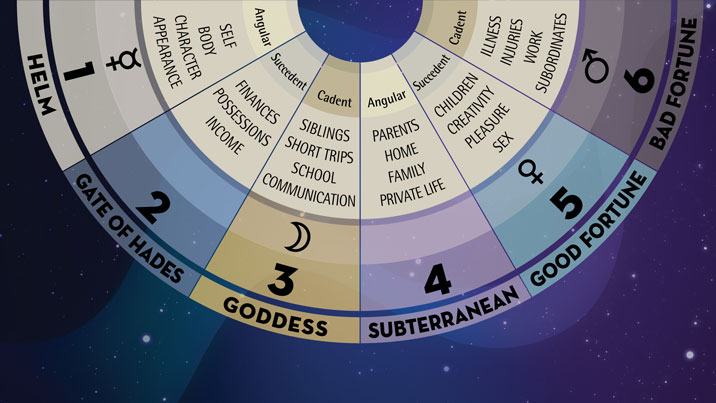 In episode 231 astrologers Kelly Surtees, Austin Coppock, and Chris Brennan begin the first of a two part series on the meanings of the twelve houses, starting with houses 1 through 6.

At the beginning of the episode we review some basic conceptual structures that are necessary for understanding how the houses got their meanings, such as the concepts of angularity, good and bad houses, and the planetary joys.

After that beginning material is out of the way, we begin by talking about the first house and what it means within the context of natal astrology, followed by the rest of the houses in zodiacal order.

This is the first of a two part series, and the rest of the houses will be dealt with in part 2 on houses 7 through 12, which should be released sometime next month. Patrons of the podcast will get early access to the episode, among other benefits.

This is a followup to our previous episodes on other foundational concepts in astrology, where we talked about the significations of the seven traditional planets, and the meanings of the zodiac signs.

This was the first episode that we recorded when we got together in Denver last week to record a bunch of episodes in person in our studio. The rest of the episodes will be released slowly over the course of the next month.

Meanings of the First Six Houses

Here are some of the significations of the first six houses we touch on in this episode:

For the rest of the houses see Significations of the Houses – Part 2: Houses 7–12.

Classes on the Meanings of the Houses

All three of us teach online courses on the astrology of the houses, and if you would like to learn more after watching this episode then you may want to check them out:

Here is the video version of our episode on the meanings of the houses in astrology:

A full transcript of this episode is available: Episode 231 transcript