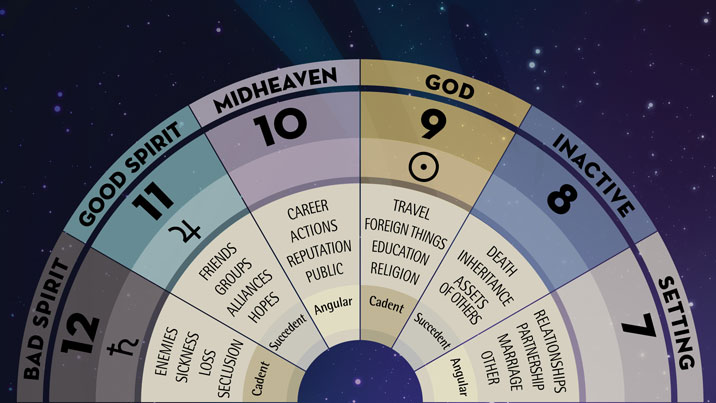 In episode 233 astrologers Kelly Surtees, Austin Coppock, and Chris Brennan get back together in the studio for the second of our two part series on the significations of the houses, this time focusing on the meanings of houses 7 through 12.

In part 1 of our series on the significations of the twelve houses in astrology we spent a lot of time in the beginning talking about different conceptual structures underlying the meanings of the houses, whereas in this episode we just jump right in to talking about the 7th house.

At the beginning we talk a little bit about the more public nature of the houses in the upper hemisphere, as well as how the interrelationship between opposing houses starts becoming more clear from the 7th house forward.

Some of the core significations we talk about for each of the houses:

Significations of the Houses Posters

The artwork for this episode is from our new full size wall poster on the significations of the houses, which will be released later this month as part of our annual 2020 astrology poster set.

If you would like to receive a notification as soon as the posters are available for sale, then sign up for The Astrology Podcast newsletter.

Full Courses on the Meanings of the Houses

All three of us teach online courses on the astrology of the houses, and if you would like to learn more after watching this episode then you may want to check them out:

Here is the video version of our episode on the meanings of the houses in astrology: