2020 Astrology Forecast: Overview of the Year Ahead 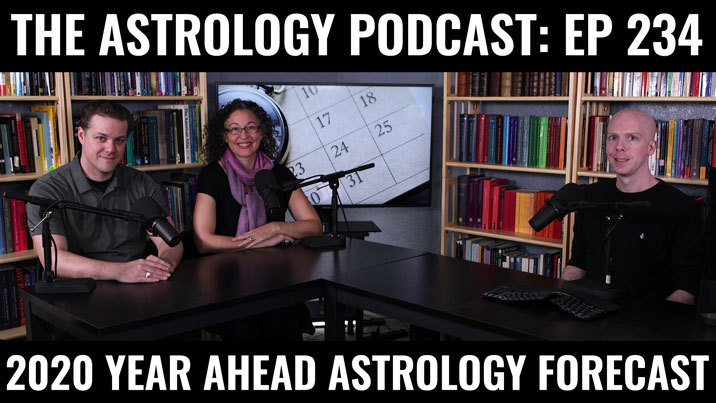 In episode 234 astrologers Kelly Surtees, Austin Coppock, and Chris Brennan provide an overview of the astrology of 2020, and discuss the major planetary alignments that will happen over the next year.

There is a lot of major planetary activity next year, including a Saturn-Pluto conjunction in Capricorn, Venus and Mars both retrograde for several months, and an epoch-defining Jupiter-Saturn conjunction in Aquarius.

We got together to record this episode in person in our studio in Denver in late November, right in the middle of a week of recording several other episodes.

Support the Podcast Through Patreon

This episode was recorded in front of a live audience of patrons through our monthly webinar format, which is one of the perks of signing up to support the production of the podcast through our page on Patreon:

Other patron benefits include early access to new episodes, behind the scenes news, and access to exclusive bonus episodes.

If you enjoy the podcast and want to show your support, become a patron!

Our sponsor for the 2020 forecast is the Honeycomb Collective Personal Astrological Almanac, which features customized natal transit planners for professional and student astrologers.

Thanks to Honeycomb for sponsoring the podcast this year, and helping us bring Austin and Kelly out to Denver!

Some of the artwork featured in this episode is from our 2020 astrology poster bundle, which is now available for purchase:

The posters help you to track the movements of the planets throughout the course of the year, and come with a bonus poster that lists the significations of the houses.

For more info about our consultations, classes, and other events see our websites:

The auspicious election for January that was chosen by Leisa Schaim is set for:

There are a four more electional charts that we found for January, which are available in our private subscriber-only podcast on auspicious elections that is released towards the end of each month.

Watch the Video Version of Our 2020 Astrology Forecast

Here is the video version of our 2020 astrology forecast episode:

A full transcript of this episode is available: Episode 234 transcript

Listen to the Audio Version of Our 2020 Forecast