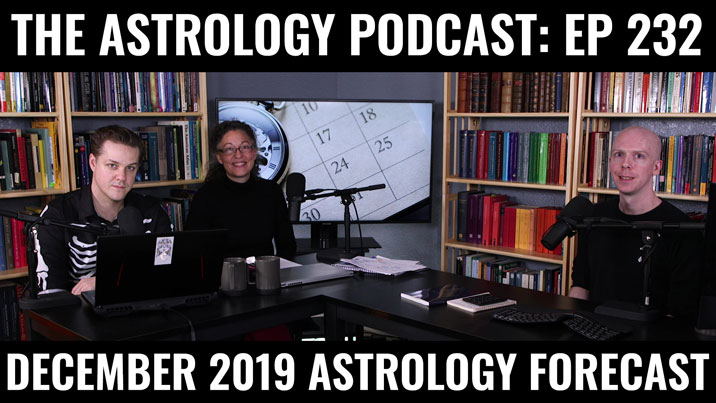 In episode 232 astrologers Kelly Surtees, Austin Coppock, and Chris Brennan meet up in the studio to give an overview of the astrological forecast for December of 2019, which features Jupiter moving into Capricorn at the start of a one year transit through that sign.

This month’s forecast also features a solar eclipse in Capricorn, a Venus-Saturn-Pluto conjunction, and a comparatively light Full Moon in Gemini.

This episode was record in person in our studio in Denver, during Austin and Kelly’s week long trip around the third week of November.

Our experiment last month worked out so well with doing the forecast segment first and then the discussion later that we decided to make that a permanent thing from now on.

In the first part of the episode we focus on the astrological forecast for December, then there is a break and Leisa Schaim joins us to talk about this month’s auspicious electional chart, and then after that we transition into some casual discussion topics.

The main discussion topic we focused on at the end was how old Kelly and Austin were when they first started doing consultations, and whether they think that an aspiring astrologer should wait until their Saturn return, which was a controversial discussion topic that we covered earlier this month in episode 229 titled Practicing Astrology Before Your Saturn Return.

This episode was recorded with a live audience of patrons who joined us through our monthly webinar format, which is one of the benefits of supporting the production of the show through The Astrology Podcast page on Patreon.

Some of the artwork featured in this episode is from our 2020 astrology poster bundle, which is now available for purchase:

The posters help you to track the movements of the planets throughout the course of the year, and come with a bonus poster that lists the significations of the houses.

Kelly is teaching workshops in NYC and Sydney in the next couple of months:

Our sponsor for December is the Honeycomb Collective Personal Astrological Almanac, which features customized natal transit planners for professional and student astrologers.

Thanks to Honeycomb for sponsoring the podcast this month, and helping us bring Austin and Kelly out to Denver!

There are a four more electional charts that we found for December, which are available in our private subscriber-only podcast on auspicious elections that was released this week.

Watch the Video Version of Our December Astrology Forecast

Here is the video version of our December astrology forecast episode:

Listen to the Audio Version of Our December Forecast