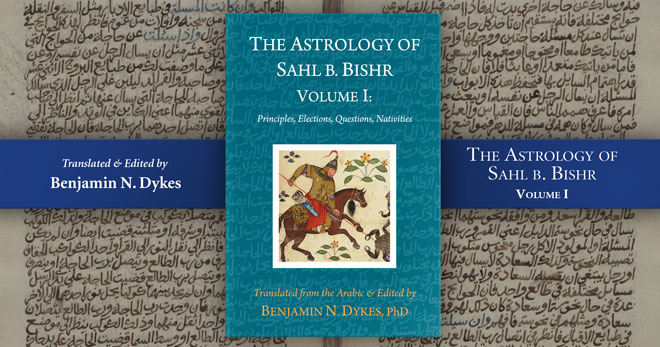 Episode 198 features an interview with Benjamin Dykes about his new translation of the works of the 9th century astrologer Sahl ibn Bishr from Arabic.

Sahl was part of the second generation of astrologers who wrote in Arabic and worked in Baghdad during the early Islamic Caliphate.

He seems to have been active around 815–825 CE, and wrote what became some of the foundational works on Medieval astrology.

The centerpiece of this volume is a huge treatise on natal astrology, which contains some of the earliest and most extensive interpretations of the rulers of the houses when they are in different houses, as well as interpretations for different Lots or Arabic Parts.

Here is the full book description from Ben:

The influential medieval astrologer Sahl b. Bishr was at the center of Baghdad politics and conflict during key years of the ‘Abbasid Caliphate, in the early 800s. In this volume, leading astrological translator Benjamin Dykes presents six of his most important works, translated from the Arabic originals into English, including his major Book on Nativities for the first time. Texts here include the Introduction, The Fifty Aphorisms, On Questions, On Choices, On Times, On Nativities, and The 66 Sections. The Book on Nativities draws most heavily on the Persian al-Andarzaghar, with extensive passages from Dorotheus, Rhetorius, excerpts from Nawbakht the Persian, the Bizidaj, and others. Of special note are lengthy reproductions of Māshā’allāh’s Treatise on Lots, portions of a book on nativities, the lords of the houses in the houses, the lord of the Ascendant in combination with others, and more.

The book was just released for sale today on Amazon to coincide with this interview:

The Astrology of Sahl B. Bishr, Volume I on Amazon

(While Amazon currently says that it ships in 1 to 3 months, orders placed now should be shipped within the next week.)

Below you will find the episode notes, which contains an outline of some of the major points we touched on in the discussion, followed by links to listen to the recording.

Here is an outline of some of the points touched on in this episode:

Here is the video version of my interview with Benjamin Dykes:

A full transcript of this episode is available: Episode 198 transcript

You can play this episode of the podcast directly from the website or download it as an MP3 to your computer by using the buttons below: