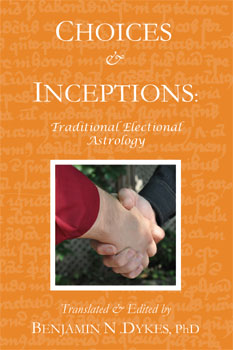 In the second episode of The Astrology Podcast I interview Dr. Benjamin Dykes about his new book on electional astrology, titled Choices and Inceptions: Traditional Electional Astrology.

Ben is one of the leading authorities in the world today on the subject of Medieval astrology.

His new book is a compilation of translations of several Medieval texts on electional astrology, with material from authors such as Masha’allah, Sahl bin Bishr, al-Kindi, al-‘Imrani, al-Rijal, and Bethen.

During the course of the show we talk about the book, and discuss some technical, conceptual, and philosophical issues related to the practice of elections.

Choices and Inceptions is available on Amazon.

Here is an outline of some of the topics that we discuss during the course of the show, in roughly the order in which we discussed them:

A full transcript of this episode is available: Episode 2 transcript