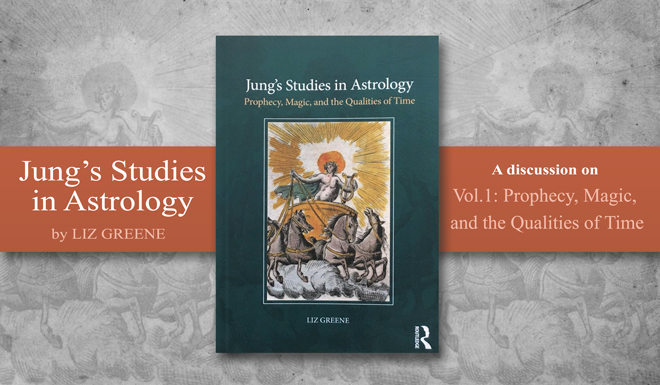 In episode 152 of the podcast Laura London and Jenn Zahrt join me to discuss a new book by Liz Greene titled Jung’s Studies in Astrology: Prophecy, Magic, and the Qualities of Time.

In the book Dr. Greene traces various modern and ancient sources that influenced Carl Jung’s views on astrology, which in turn helped to shape his approach to psychology and some of the major concepts that he introduced in his work.

The purpose of this episode of the podcast was to discuss the book, and some of the thoughts we had after reading it over the past week.

This book is the first of two volumes that were published at the same time, and you can find more information about each on Amazon:

Jung’s Studies in Astrology: Prophecy, Magic, and the Qualities of Time

The Astrological World of Jung’s Liber Novus: Daimons, Gods, and the Planetary Journey

We decided to restrict this discussion to just volume 1, and hope to record a followup podcast at some point about volume 2, which deals with The Red Book by Jung.

This is a followup episode that is meant to complement two previous discussions about Jung over the past few months, the first with Safron Rossi about her book Jung on Astrology, and the second with Keiron Le Grice about Jung’s concept of synchronicity.

Laura London is the host of the Speaking of Jung Podcast, where she interviews Jungian analysts about a wide variety of topics related to Jung’s work and thought.

Jenn Zahrt specializes in the study of astrology in Germany in the early 20th century, and previously appeared on the podcast to discuss the life and work of Elsbeth Ebertin.

Below you will find links to download or stream the recording of the discussion.