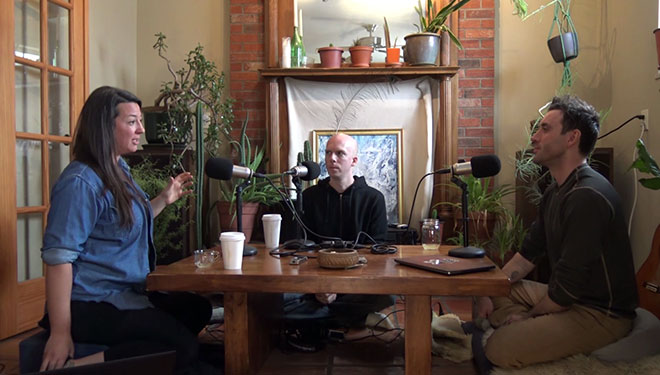 In episode 151 of the podcast I met up in person with fellow astrology podcasters Adam Sommer and Eugenia Krok, and we spent the afternoon answering questions that were sent in by listeners of our shows.

In this episode we cover topics ranging from our experiences with running a podcast and how we got started, to feelings around exchanging money for astrological consultations, and advice for newer astrologers about mistakes we made early in our careers.

We met at Adam’s house in Boulder, on a snowy afternoon in Colorado. Somehow all three of us run successful astrology podcasts and live in Colorado, but we have never gotten together at the same time to record an episode. Since Eugenia is moving out of the country soon, we decided to take this last opportunity to record a discussion.

I brought some recording equipment that I’ve slowly been accumulating over the past few years, as I’ve been using some of the money donated by patrons through my page on Patreon to work towards building an in person podcasting studio. This was my first time really putting some of that equipment to use, and it went pretty well!

We decided to make a full day of it, and to record three separate podcast episodes for each of our shows that afternoon, where we responded to questions from listeners of each of our podcasts.

Each of us is then going to release a portion of the discussion we had that day as an episode on our respective podcasts.

Be sure to subscribe to Adam and Eugenia’s podcasts to get notified as soon as parts 2 and 3 of this discussion are available.

Questions Discussed in This Episode

Here are some of the questions submitted by listeners that were used as starting points for the discussion in this episode on The Astrology Podcast:

In Adam’s episode, which will be released on his podcast later, we focused on talking about Uranus’ ingress into Taurus, and the relevance of that transit for things like cryptocurrency. In Eugenia’s episode we discussed what happens when you feel like you are missing the mark in an astrological consultation, as well as a few other questions.