Astrology Forecast for April of 2018 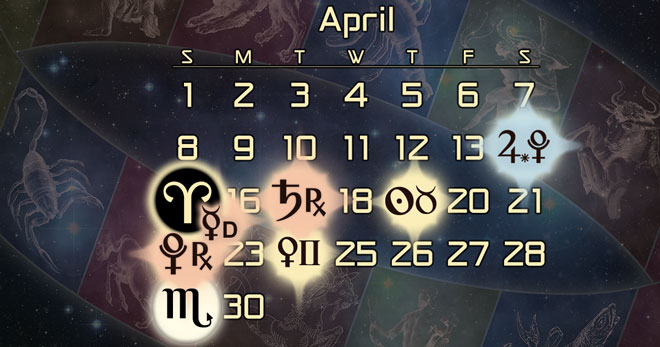 In episode 150 of the podcast astrologers Austin Coppock and Kelly Surtees join the show to talk about the astrological forecast for April of 2018.

The forecast for April includes a Mars-Saturn conjunction in Capricorn right at the beginning of the month, Mercury stationing direct in Aries, Saturn and Pluto stationing retrograde, and more.

At the top of the show we get into a few pre-forecast discussion topics and announcements, which included an announcement about a podcast listener meetup at the United Astrology Conference in Chicago in May, Kelly gives us a report on the recent Northwest Astrological Conference, and some brief reflections on the growing popularity of astrology.

As usual, the artwork for this episode is from the 2018 PlanetWatcher Calendar.

This month’s episode is available in both audio and video versions, and you will find links to both at the bottom of this page.

Timestamps for different parts of the episode, in case you want to skip ahead to a segment:

Here is the primary auspicious electional chart that we highlighted for April, which was picked out by Leisa Schaim:

There are four more electional charts that we found for April, which will be presented in our private subscriber-only podcast on auspicious elections that is released today.