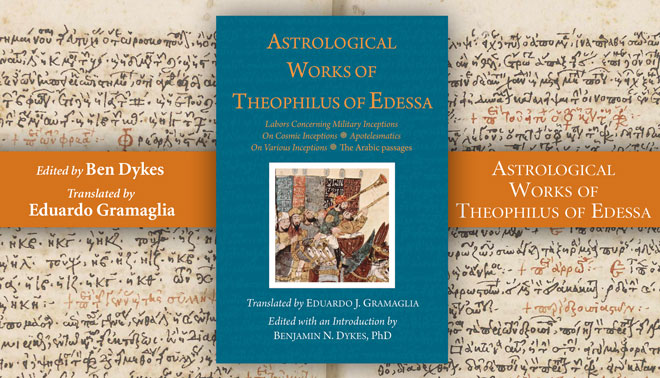 In episode 120 of the podcast Benjamin Dykes and Eduardo Gramaglia join the show to talk about their new translation of the astrological works of the 8th century astrologer Theophilus of Edessa.

Theophilus was a Christian astrologer who served the kings of the early Islamic Empire around the time of the pivotal transition between the Umayyad and Abbasid Caliphate.

He was an older contemporary of other notable astrologers who lived during the early Medieval tradition like Masha’allah, although he is unique in that his surviving works were written in Greek rather than Arabic.

He also drew on a number of earlier Greek sources such as Dorotheus of Sidon. As a result of this, Theophilus is an important transitional figure between the Hellenistic and Medieval astrological traditions.

The new translation by Ben and Eduardo marks the first time that Theophilus’ astrological works have been fully translated into any modern language, and in this interview we talk about who Theophilus was, the process of doing the translation, and the significance of his work.

The translation is now available for purchase on Amazon:

Astrological Works of Theophilus of Edessa