The Early History and Meanings of the Nodes in Astrology 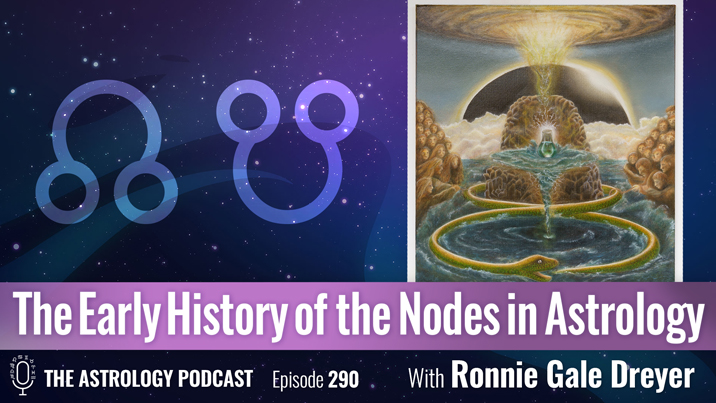 In episode 290 astrologer Ronnie Gale Dreyer joins the show to talk about the early history and meanings of the nodes in astrology, both in the western and Indian astrological traditions.

As discussed in episode 127, in the late 20th and early 21st century the nodes came to be associated with one’s past and future life in modern western astrology, but these associations are absent from the tradition if you look back more than a century or so.

The premise of this discussion, then, is what did the nodes mean in the older traditions of astrology if they didn’t have to do with past lives?

Ronnie is the author of the book Vedic Astrology: A Guide to the Fundamentals of Jyotish, and she is also a Sanskrit scholar who is currently working on a translation of a 4th century Indian text on applying astrology to the lives of women.

Together we set out to explore and discuss the early history of the nodes in eastern and western astrology.

You can find out more information about Ronnie on her website:

The painting featured in the cover art for this episode is by astrologer Shu Yap, and depicts the Samudra Manthan story, which we mention at one point in this episode as being connected to Hindu legends surrounding the origins of the nodes. You can follow Shu on Instagram:

Here is the video version of this episode on the Moon’s nodes: