Misconceptions About Mundane Astrology in the Media 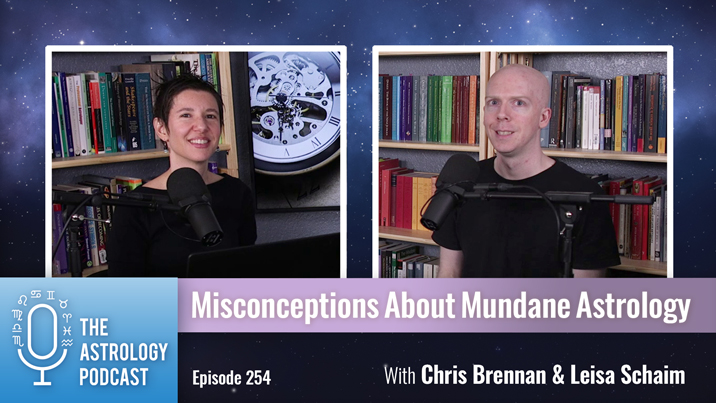 In episode 254 astrologers Chris Brennan and Leisa Schaim discuss a recent article in the New York Times that claimed that astrologers did not predict the recent worldwide crisis, and some of the related issues with coverage of astrology in the media, as well as the practice of mundane astrology.

The starting point for this discussion was an article that was published in the New York Times on May 9, 2020 titled Will Coronavirus Kill Astrology?

The author primarily focuses on the Sun-sign astrologer Susan Miller, and the central argument is evidently that astrologers not only did not predict the Covid-19 pandemic, but they did not predict that it would be a difficult year for the world in general in their forecasts for 2020.

During the course of the episode we discuss the article and its claims, question the validity of some of its conclusions, and then discuss some broader issues about the practice and perception of astrology.

Mundane Astrologers Discussed in This Episode

In this episode we discuss the works of two mundane astrologers, André Barbault and Richard Tarnas.

André Barbault was a French astrologer who died in October of 2019. In 2012 he published an article titled “Survey of Pandemics” (Aperçu sur les Pandémies) in which he studied the outer planet alignments that coincided with major pandemics in the past century, and then used that information to make a prediction that the next such alignment around 2020-21 could coincide with a major pandemic:

“Going back to the pandemics and going back to the past century, the four crises of 1918, 1954, 1968 and 1982 are obvious, the two considerable being the first, the famous “Spanish flu” which is said to have claimed 25 million lives, and the last one in which AIDS, which is even more devastating and continues to be deadly. Since then, there has also been a small influenza surge in 2009, against the last lowest cyclical index (2010). We may well be in serious danger of a new pandemic at the 2020-2021 mark, at the lowest peak of the cyclical index of the 21st century, with the quintet of outer planets gathered over a hundred degrees, a conjunction Jupiter-Saturn-Pluto can more specifically, and even specifically, lend itself to the “tissue” of this imbalance. Nevertheless, this configuration can also transfer its core of dissonances to the terrain of geophysical disasters, without ultimately sparing the international affairs scene, Nature and Society being indiscriminately affected.”

This prediction was published in The Astrologer journal (L’Astrologue), issue number 177, in the first quarter of 2012. The full text of the original article is available on André Barbault’s website, the translation of the paragraph above was made by astrologer Mark Cullen in a Skyscript forum thread, and I’m working on a full translation of the article into English that will be released soon.

In this episode we also discuss the study of mundane astrology that was published by Richard Tarnas in his 2006 book Cosmos and Psyche, which also had some interesting studies of how certain pandemics have coincided with conjunctions of Saturn and Pluto, which is a conjunction that many astrologers noted was occurring again just this year in January:

“Another such defining [Saturn-Pluto] conjunction was that of 1348-51 that coincided with the eruption and spread of the Black Death, which similarly devastated Europe and set in motion cultural and economic shifts that permanently transformed European life in the late medieval period. The Black Death, or bubonic plague, began in China in 1333 in coincidence with the preceding Saturn-Pluto opposition and reached a climax in Europe in the 1348-51 period during the conjunction. A comparable pattern can be discerned in the AIDS epidemic, which first widely emerged and was identified during the Saturn-Pluto conjunction of 1981-84, and which reached pandemic proportions worldwide, especially in Africa, during the following Saturn-Pluto opposition of 2000-04.” (Cosmos and Psyche, p. 217)

During the course of the show we discuss whether studies like this demonstrate the opposite of the claim made by the New York Times article, why hit pieces like this are so common, and whether there is anything astrologers can do about them.

You can watch the video version of this episode on our YouTube channel:

A full transcript of this episode is available: Episode 254 transcript