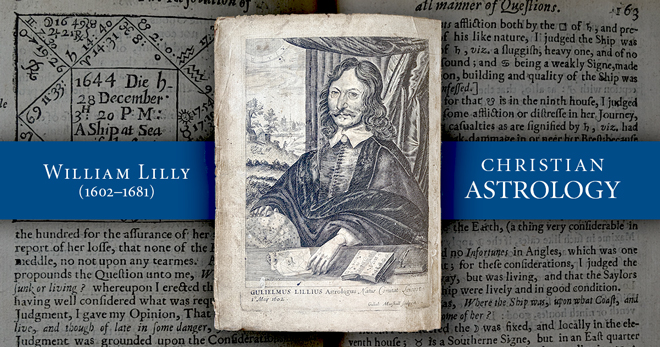 Episode 221 of the podcast features an interview with Nina Gryphon about the famous 17th century astrologer William Lilly and his book Christian Astrology.

Lilly published Christian Astrology in 1647, and it was the first major textbook on astrology that was written in English. Most western astrological texts were written in Latin up until that point in history.

The book has had a deep and enduring impact on astrology in the west over the past few centuries since it was published, and Lilly is usually regarded as one of the most influential figures in the western astrological tradition.

Nina has been studying Lilly’s work for the past two decades, and in this episode we provide a detailed overview of his life and work.

For more information about Nina check out her website NinaGryphon.com

This episode is available in both audio and video versions. You will find links to each at the bottom of the page, just after the episode outline and gallery.

Here is an outline of the main points we touched on in this episode. This is an edited version of our show notes, which Chris and Nina collaborated on before recording the episode.

Some pictures of Chris’ copy of the first edition of Christian Astrology:

A full transcript of this episode is available: Episode 221 transcript

Here is the video version of this episode on William Lilly’s Christian Astrology: