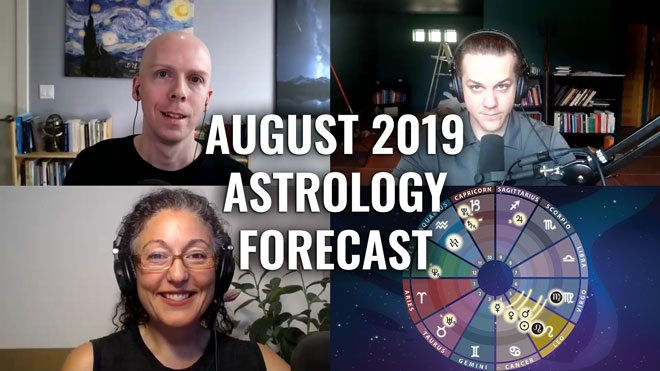 In the first part of the episode we catch up on Kelly and Austin’s recent moves, and reflect on coming out of the other side of the difficult transits in June and July, and then in the second part of the show we get into the forecast for August.

The first half of August features a bunch of inner planets moving into Leo and trining Jupiter in Sagittarius, while the second part of the month has many of the same planets forming a stellium in Virgo.

Later in the episode we also present one auspicious electional chart for starting different types of ventures and undertakings this month.

There is a section for timestamps below, if you want to jump straight to the forecast portion of the episode.

Support the Podcast + Get Benefits

If you listen to the podcast regularly and want to show your support, plus get access to benefits and bonus content, then become a patron through Patreon:

Benefits that patrons get include:

We recently set a new funding goal on Patreon to be able to travel more to record in-person interviews with notable astrologers from around the world.

The Astrology of August

Here are some of the highlights of August:

There are a four more electional charts that we found for August, which are available in our private subscriber-only podcast on auspicious elections that was released yesterday.

Some approximate timestamps if you want to jump to specific parts of the episode:

Listen to the Audio Version of Our August Forecast