Astrology Forecast and Elections for February 2016 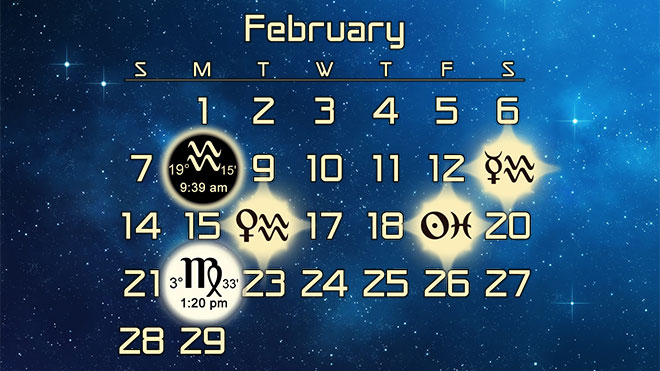 Episode 63 features a discussion with Kelly Surtees and Austin Coppock about some of the major astrological alignments and auspicious electional charts in the upcoming month of February 2016.

During the course of the show we cover topics such as the impending Mars retrograde in Sagittarius and Scorpio, an upcoming emphasis on mutable signs, and a recap of some of the highlights of the recent Mercury retrograde in Aquarius and Capricorn.

I also introduce some auspicious electional charts for different dates throughout the month, and talk about the rationale for the charts I selected.

Below you will find the show notes, followed by links to download or stream the recording of this episode.

This is the source of the cover art that we use for our forecast episodes, and it is a great way to look at the major planetary alignments and ingresses for the entire year at a glance.

These elections are set for Denver, but you should be able to use the same times listed approximately after you have set them for your location, since they are set for local time. Just make sure that when you relocate the chart that it has the same rising sign and degree in your location as what is shown in the chart below.