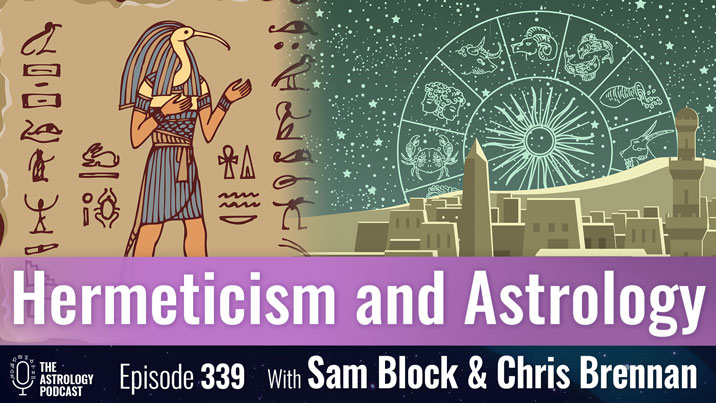 In episode 339 Sam Block joins the show to talk about the ancient philosophy of Hermeticism and its relationship to Hellenistic astrology.

Hermeticism is a religious, philosophical, and mystical movement that arose in Hellenistic Egypt around the first century, and is attributed to the teachings and practices of Hermes Trismegistus.

It represents a popular synthesis of a number of philosophical and religious trends that were popular during the Hellenistic period, including Stoicism, Platonism, native Egyptian religion, and astrology.

The majority of what is known about this philosophical or religious school survives in the Corpus Hermeticum and a handful of other writings from that time period.

During the course of the episode we talk about what is known about the Hermetic philosophical tradition, and how it relates to the technical tradition of astrology that arose during the same time period.

Sam is the author of a series on Hermeticism on his website, which I would recommend checking out for more information on this topic:

Timestamps for different topics covered and parts of the discussion:

Watch the video version of this episode on Hermeticism here:

A full transcript of this episode is available: Episode 339 transcript