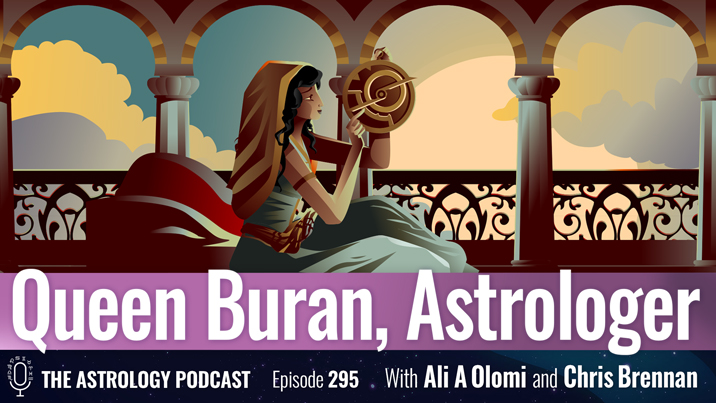 Episode 295 features an interview with Ali A Olomi about the 9th century Queen Buran, who is the first woman we know of by name that practiced astrology.

Previously in episode 86 I discussed historical references to women practicing astrology as early as the 1st century CE, and discussed the 5th century philosopher Hypatia as one possible candidate for earliest figure.

In this episode we focus on the famous Queen Buran, who lived in Baghdad in the 9th century, and talk about how she is a much more reliable candidate for earliest woman in history who likely had training as an astrologer and used it in practice.

Buran was the wife of the Caliph Al-Ma’mun, who reigned from 813–833, during the early Islamic Golden Age. Their wedding was so extravagant that it became known as something of a legend for centuries.

Buran came from a notable family line of astrologers, and her great-grandfather Nawbakht al-Farisi was the head of a group of astrologers that selected the electional chart for the founding Baghdad.

A legend survives about a prediction that Buran herself made using astrology that helped to avert an assassination attempt on the Caliph al-Mu’tasim.

We spent a good deal of the episode contextualizing Buran’s life in 9th century Baghdad, discussing the history of the Persian and Arabic astrological traditions in the early medieval period, and talking about some of the notable astrologers that were contemporaries of Buran such as Masha’allah, Sahl ibn Bishr, and Abu Ma’shar.

Ali is a historian of the Middle East and Islam, who focuses in particular on esotericism, astrology, and folklore. He is also the host of the Head on History Podcast, and posts weekly threads on astrology and esotericism through his page on Twitter @aaolomi.

This is a version of the show notes that Chris prepared prior to the interview.

Bibliography of some works cited:

Watch the video version of this episode on Buran through YouTube:

A full transcript of this episode is available: Episode 295 transcript