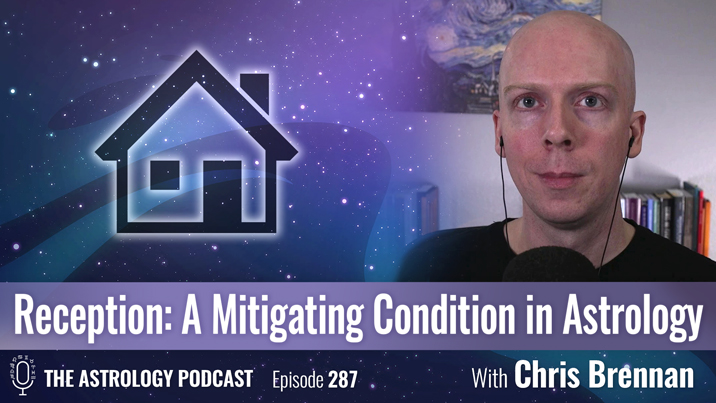 Episode 287 features a lecture by Chris Brennan on the concept of reception in traditional astrology, and how it can be used as a powerful mitigating factor in birth chart interpretation.

Broadly speaking, reception occurs when one planet is placed in a sign ruled by another planet, and the ruler of the sign aspects the guest planet.

Since the signs of the zodiac were originally conceptualized as the homes or dwelling places of the planets, reception was conceptualized as what happens when a host planet welcomes and supports guests staying in its home.

In the first part of the lecture I talk about the history and philosophy behind this concept, while in the second half I present a bunch of contemporary chart examples to demonstrate how the technique works in practice.

This episode is available in both video and audio versions below.

Watch The Video Version of this Episode on Reception

Here is this video version of this episode on the concept of reception in astrology:

A full transcript of this episode is available: Episode 287 transcript