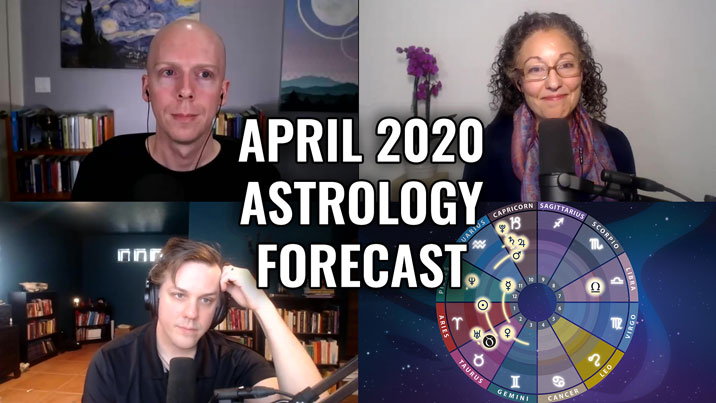 In episode 248 astrologers Kelly Surtees, Austin Coppock, and Chris Brennan discuss the astrology of the recent coronavirus pandemic, and later provide a general astrological forecast for April of 2020.

This is our first episode together since we recorded the last forecast in mid-February, and the world has changed a lot since that time.

We decided to focus on talking about the pandemic in the first half of the episode, and then eventually transition into the monthly forecast later on.

A lot of our discussion about the coronavirus focuses on the Saturn-Pluto conjunction that went exact in early January when the pandemic was just ramping up, as well as the Mars-Saturn conjunction that is happening in the sky now.

Later we briefly touched on some things like the doctrine of subsumption in mundane astrology, and the discovery of a new comet that may be visible soon.

Honestly we covered so much in this episode that it is hard to summarize it all here, so you’ll have to listen in.

April is not a great month this year for good elections, and the best chart we could find was:

We will present a few other elections for April on our private subscriber-only podcast on auspicious elections in the next few days.

We also have a full year-ahead electional astrology report for 2020, which highlights some better charts for later in the year.

Watch the Video Version of Our April Astrology Forecast

Here is the video version of our April astrology forecast episode:

A full transcript of this episode is available: Episode 248 transcript

Listen to the Audio Version of Our April Forecast