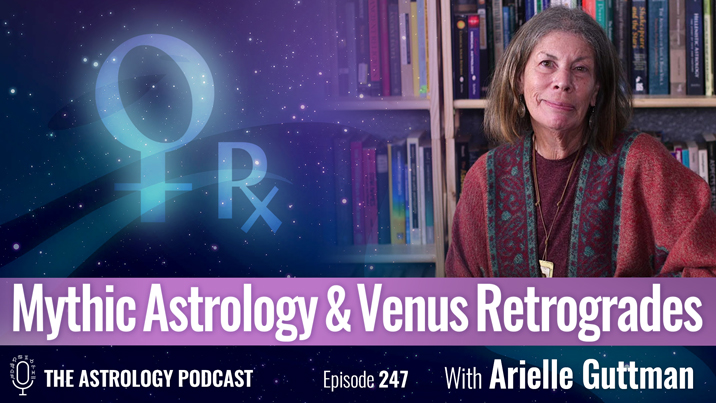 Episode 247 features an interview with astrologer Arielle Guttman about her work on using myth as an interpretive device in astrology, as well as the importance of the synodic cycle of Venus, providing insight into the upcoming Venus retrograde.

During the course of the interview we talk about Arielle’s background in astrology and how she got into it, her work with Jim Lewis on relocational astrology, the use of myth as a tool to help explicate archetypes in astrology, and her work on what she calls the Venus Star Point.

The Venus Star Point in natal astrology is the conjunction between Venus and the Sun that occurred prior to your birth, which creates a sensitive degree in your chart, and also locks in a resonance between that phase of Venus whenever it reoccurs later in your life.

Here is a handout from Arielle’s website for calculating your Venus Star Point:

You can find out more information about Arielle’s work through her website:

Arielle came out to Denver to give a talk for our local astrology group during the second week of March, but this was just as the COVID-19 pandemic was breaking out in the US, so we switched her talk to a webinar on Saturday, March 14, and then recorded this podcast the following day.

If you enjoy this episode of the podcast, the webinar the previous day went into a bit more detail about her work on Venus, and the recording is available as an episode of the Casual Astrology Podcast for patrons.

This episode was co-hosted by astrologers Chris Brennan and Leisa Schaim.

A full transcript of this episode is available: Episode 247 transcript