The Yavanajataka: Greek Astrology in Sanskrit? 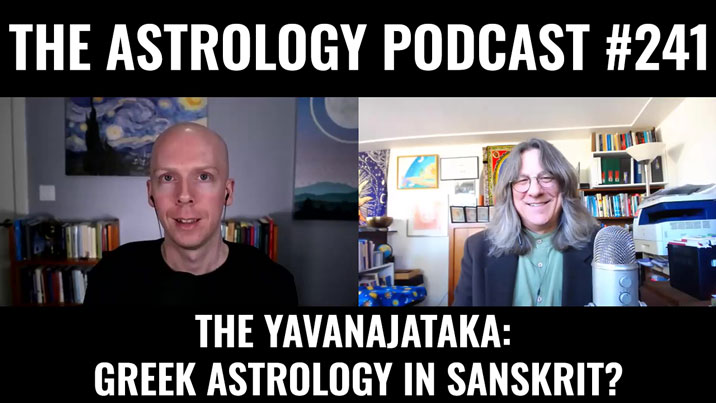 Episode 241 of the podcast features an interview with Kenneth Miller about an ancient Sanskrit text from India known as the Yavanajataka, and the debate about whether it is a translation of a Greek work on Hellenistic astrology.

A critical edition and commentary on this text was published by David Pingree in 1978, and since that time it has become generally accepted in academic circles that there was some sort of transmission of Greek astrology to India between the 1st and 7th centuries CE, which was then merged with the indigenous forms of astrology that already existed there.

In recent years some scholars such as Bill M. Mak have pushed back on Pingree’s dating of the Yavanajataka and some of the conclusions that he drew from the text, while still accepting the general premise that the text demonstrates that some sort of transmission did occur.

These conclusions on the part of academics are sometimes rejected by some practitioners of Indian astrology, who believe that their tradition dates back thousands of years, and was integrated into the ancient Vedic religion.

At the United Astrology Conference in 2018 Kenneth Miller presented a talk titled There’s Curry in my Feta! The Development of Horoscopic Astrology in India and Egypt, where he pushed back on the notion that the Yavanajataka presents a purely Greek form of astrology.

In this podcast episode we decided to sit down and talk about both sides of the debate, and then actually read through several passages from Pingree’s translation of the Yavanajataka, in order to highlight both some similarities as well as some differences when compared to the doctrines of Hellenistic astrology.

Kenneth practices Indian astrology, and is also the President of Kepler College, and you can find out more information about his work at:

Watch the Video Version of This Episode on the Yavanajataka

Here is the video version of our discussion about the Yavanajataka:

A full transcript of this episode is available: Episode 241 transcript