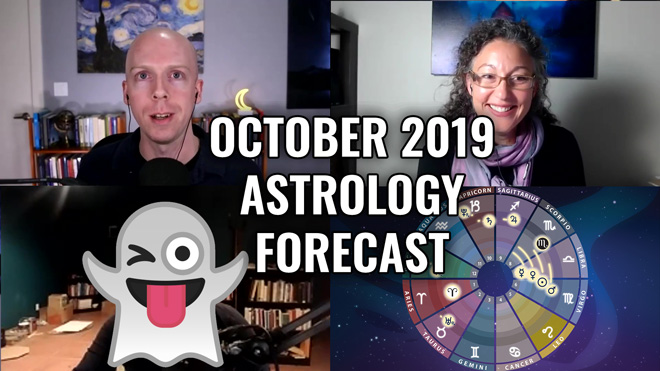 In episode 224 astrologers Kelly Surtees and Austin Coppock join the show to talk about the astrological forecast for October of 2019.

October features Mercury stationing retrograde in Scorpio on Halloween, which has been dubbed Mercury Spookygrade by Cam White.

The rest of the astrology of October features inner planets moving through Libra and squaring Saturn and Pluto in Capricorn, and then later in the month moving through Scorpio and opposing Uranus.

We ran into some unexpected technical issues with this episode due to a snafu with Austin’s internet connection, so his video is frozen in the video version, and we had to cut out some stuff in post in order to clean up the audio version.

Our sponsor for October is the Honeycomb Collective Personal Astrological Almanac, which features customized natal transit planners for professional and student astrologers.

There are a four more electional charts that we found for October, which are available in our private subscriber-only podcast on auspicious elections that was released last week.

We released a preview of the Auspicious Elections Podcast this week, which was the episode that subscribers had access to since the beginning of September, in order to give you an idea of what that private podcast is like when you sign up for it through our page on Patreon.

Here are some timestamps if you want to jump straight to the forecast:

Listen to the Audio Version of Our October Forecast