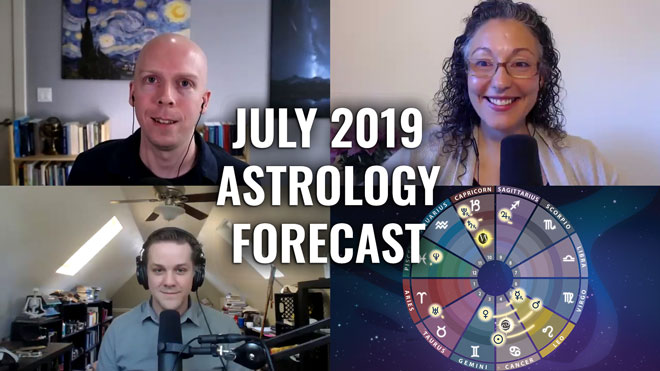 July begins with a tricky Mercury retrograde station conjunct Mars in Leo, and also features the first full set of eclipses in Cancer and Capricorn.

We open the show by talking about Chris’ recent trip to Romania and the United Kingdom for astrology conferences, and reflecting on what ended up happening with the astrology of June, which was the first half of what has lovingly been dubbed as this year’s astrological “meat grinder”.

Later in the episode we also present one auspicious electional chart for starting different types of ventures and undertakings this month.

There is a section for timestamps below, if you want to jump straight to the forecast portion of the episode.

If you listen to the podcast regularly and want to help support the production of future episodes, while getting access to benefits and bonus content like early access to new episodes or a private podcast series for subscribers, then sign up to become a patron through our page on Patreon:

The Astrology of July

Here are some of the highlights of July:

There are a four more electional charts that we found for July, which are available in our private subscriber-only podcast on auspicious elections that was released yesterday.