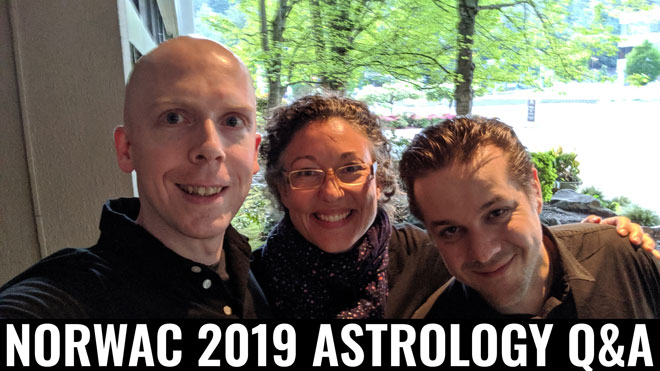 In episode 208 astrologers Kelly Surtees, Austin Coppock, and Chris Brennan answer questions about astrology from listeners in front of a live audience at the 35th annual Northwest Astrological Conference in Seattle, Washington on May 23, 2019.

The Q&A session was recorded in front of a live audience of listeners, who flew in to Seattle to join us for the event the day before the conference officially began.

Listeners of the podcast sent in questions in the weeks leading up to the event, and we selected some of the best ones to answer and discuss during the Q&A session.

Some of the questions were submitted via Twitter, while others came from our channel on YouTube, and still others were sent in via email.

We received a lot of good questions, and while we weren’t able to get to all of them, we did a pretty good job of tackling as many as we could in the two hours that we had that night.

We also did a recap of #NORWAC2019 in the first hour of the astrology forecast episode for June 2019 that we recorded immediately after we returned from the conference, if you want to hear more about it.

Below will be a list of some of the questions we answered in this episode, followed by links to download the recording at the bottom of the page.

This episode is available in both audio and video versions. Thanks to Cam White for helping to set up and record this event, and also to Stephen Coppock for editing the footage.

Here are some of the questions that we answered during the Q&A, or intended to answer, although not necessarily in the order in which they appear in the episode:

Why are you so enthusiastic about astrologers meeting each other?

(This was meant to be the final question, but Chris accidentally started answering it at the beginning.)

This is probably going to become increasingly common. What role could professional organizations play in protecting astrologers and their content?

Do you have any ideas on how the community could go about solidifying & popularizing a unified code of ethics? Understanding that there have been many published by various orgs, how can we make one that’s widely agreed upon & then make it well known amongst the community?

How do you explain your job to people you don’t know well and likely don’t understand astrology?

How would you advise students of traditional astrology who are interested in making content? What kinds of making have been part of your growth as astrologers?

What was the single most effective thing you did to gain enough clients to be self-employed, and how do you see this reflected in your chart?

soil lore, nascent us be  @luna__aquarius

I wanna hear fun astrology stories where the symbolism was ridiculously spot on.

Where were the ‘untranslated works’ found that have been recently translated?

Can you clarify how it is determined which planet is separating or applying?

What areas of #Astrology are begging for research projects?

I’ve read that horary was a traditional first entry for new astrologers. Pedagogically, does that make sense? Can learning to read horary help you with delineating a birth chart or are the skill sets and orientations very different?

How do you determine how much to charge for a reading?

Memes and the Damage Done

The symbolic degree system – The general consensus regarding this fringe technique. I hear a lot about it but I’m not sold on it’s effectiveness…

(Summarized) It could be interesting to hear some thoughts on the role of embodied mentors in the serious study of astrology, if we take astrology to be a discipline that provides a sort of initiation or a rite of passage into a larger sense of self and being.

Here is the video version of our NORWAC Q&A event:

Listen to the Audio Version of Our NORWAC Q&A