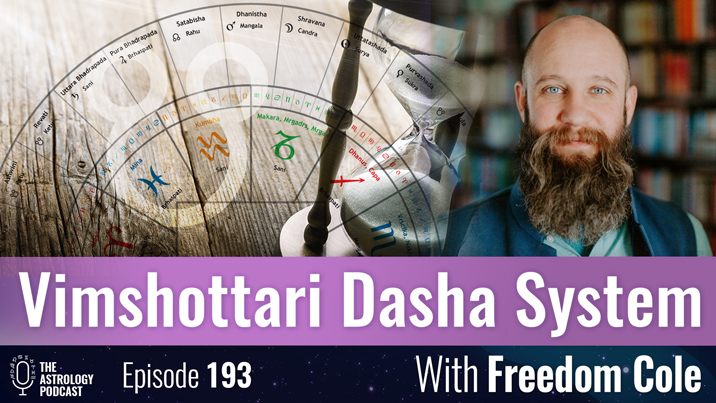 Episode 193 features an interview with astrologer Freedom Cole on the vimshottari dasha system, which is a timing technique used in Vedic astrology.

In the last episode of the podcast we presented an introduction to a recently recovered ancient time-lord technique called zodiacal releasing, and noted how a number of similar techniques called “dasha” systems are still used in Indian astrology to this day.

For this episode I decided to interview an expert in Vedic astrology in order to provide western astrologers with a well-rounded introduction to one of the most popular dasha techniques that is used today.

He also teaches a course on Vedic astrology, and the next class begins on March 28, 2019. You can find more information on his website:

This episode is meant to be a general introduction to the calculation, conceptualization, and interpretation of the vimshottari dasha system. The outline is largely based on the chapter on dashas in volume 1 of Freedom’s book, although the book goes into more detail.

There is a long set of show notes below, which outline some of the main points touched on during the course of the episode.

This episode is available in both audio and video versions, and you will find links to both at the bottom of this page.

Here is an outline with some of the major points touched on in this episode:

A full transcript of this episode is available: Episode 193 transcript