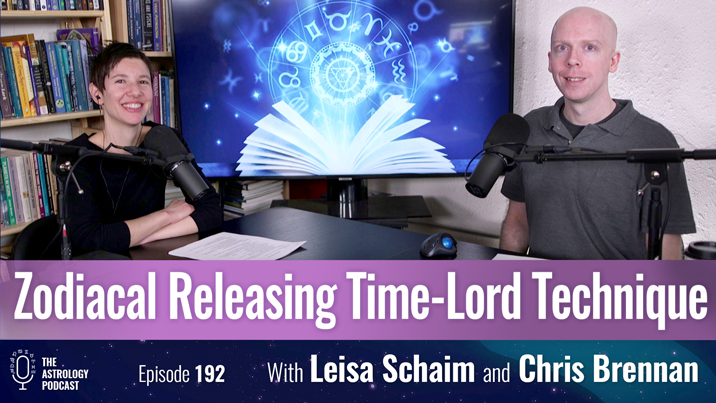 In episode 192 astrologers Chris Brennan and Leisa Schaim present a detailed introduction to the ancient zodiacal releasing timing technique, which divides your life into chapters and paragraphs, and helps to identify your life story.

In ancient Hellenistic astrology there were several different time-lord techniques that were used to determine when the potential of placements in the birth chart would be awakened, although many of them were lost in the transmission of astrology over the past 2000 years.

Zodiacal releasing is a time-lord technique that has been recovered over the past two decades through translations of the Greek text of the 2nd century astrologer Vettius Valens.

In this episode Chris and Leisa present a 4-hour workshop on the technique, in order to provide the audience with a broad overview and introduction to zodiacal releasing.

There is a long set of show notes below, which outline some of the main points we made during the course of the episode.

Interpreting the Quality of a Period

The Loosing of the Bond

Once you are done with this podcast, if you want to learn more about zodiacal releasing, here are some other resources:

A full transcript of this episode is available: Episode 192 transcript