Demetra George on Ancient Astrology in Theory and Practice 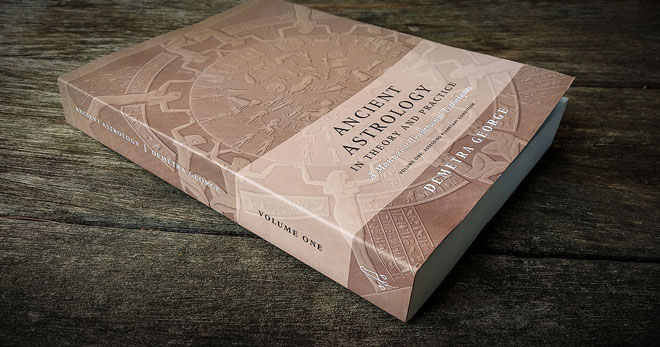 Episode 188 features an interview with astrologer Demetra George about her new book titled Ancient Astrology in Theory and Practice, A Manual of Traditional Techniques – Volume One: Assessing Planetary Condition.

This is the first of two volumes where Demetra provides a detailed treatment of ancient Hellenistic astrology, which is the type of astrology that was practiced around the time of the Roman Empire.

Unlike other treatments of ancient astrology, Demetra spends most of the book focusing on the actual techniques and practice of the early forms of astrology, rather than spending a bunch of time talking about the history.

It is also designed to be a workbook, so that at the end of each chapter you can apply the techniques to your own chart, using guided lessons so that you can confirm that you understand what you read by putting the interpretive principles into practice.

The book was published by Rubedo Press, and can be ordered here:

This interview with Demetra is available in both audio and video versions below.

The interview was originally recorded on November 9, 2018, but then I just released it today on January 2, 2019 to coincide with the official release of the book today.

Here is the video version of my interview with Demetra:

A full transcript of this episode is available here: Episode 188 transcript