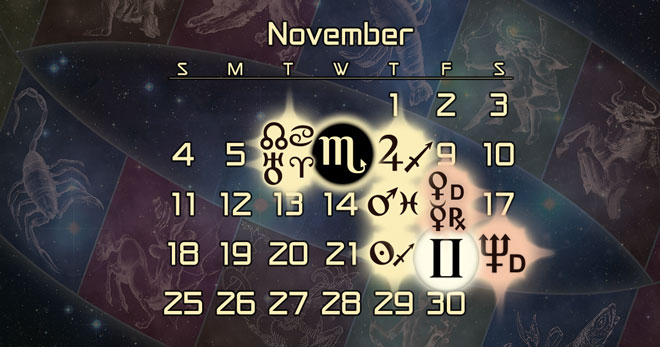 In episode 178 of the podcast astrologers Kelly Surtees and Austin Coppock join the show to discuss the astrological forecast for November of 2018, which features Jupiter moving into Sagittarius for a year-long transit through that sign.

Later in the episode we highlight one auspicious electional chart this month, a Jupiter in Sagittarius election, which can be used for beginning a new venture or undertaking.

Below you will find the show notes, followed by links to download the recording of this episode at the bottom of the page, which is available in both audio and video versions.

Major Astrological Alignments for November of 2018

Here are some of the major transits for November that we cover in this episode:

There are a few more electional charts that we found for November, which are available in our private subscriber-only podcast on auspicious elections that was released today.

Here is a preview video from this month’s elections episode, recorded in our new studio.

Watch the Video Version of the November Forecast

Here is the video version of the November 2018 astrology forecast:

Listen to the Audio Version of the November Forecast Episode