Astrology Forecast and Election for November 2017 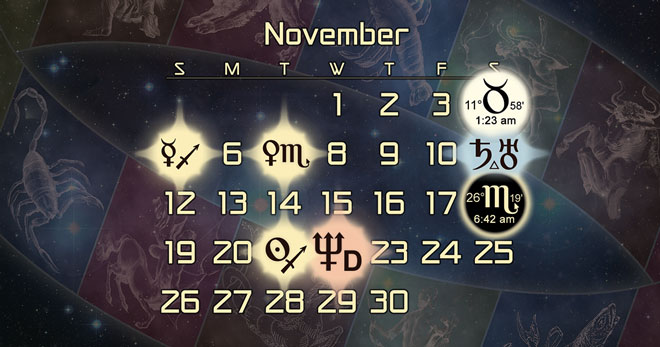 In episode 130 of the podcast astrologers Kelly Surtees and Austin Coppock join the show once again to talk about the astrological forecast for November of 2017.

The show opens with an hour-long discussion about news and observations related to the recent ingress of Jupiter into Scorpio, as well as some followup discussion about episode 127 on the lunar nodes.

The forecast itself covers transits such as the final Saturn-Uranus trine of the year, lunations in Taurus and Scorpio, and more.

Later in the episode we also feature an auspicious electional chart for the month of November, which is an Aquarius rising election with Saturn in the 11th house.

We talk about news, the tropical zodiac, the nodes, and Jupiter in Scorpio for the first hour of the podcast, and then in the second hour we focus on the forecast for November.

If you want to jump forward to the forecast segment of the episode, we start that discussion at 1:07:05 minutes into the audio recording.

Here is the primary auspicious electional chart that we highlighted for November:

There are three more electional charts that we found for November, which we will be talking about in our private subscriber-only podcast on auspicious elections that will be released tomorrow.