Astrology Forecast and Election for September 2017 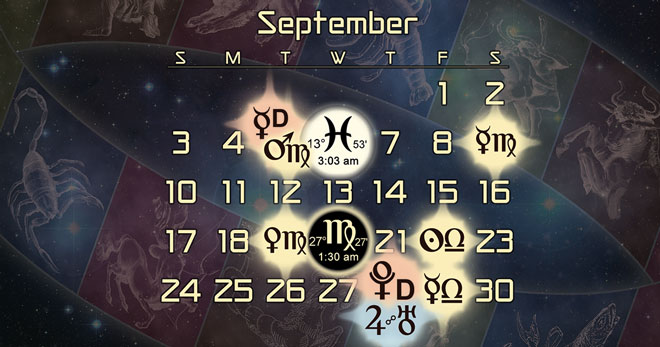 In episode 122 of the podcast astrologer Kelly Surtees and Austin Coppock return to the show to talk about the astrological forecast for September of 2017.

The astrology of September features the final of three Jupiter-Uranus oppositions, Mercury stationing direct in Leo around the time of a Pisces full moon, and at one point a stellium of five planets in Virgo.

Later in the episode we also feature one auspicious electional chart, which is especially good for projects related to groups and friends, with Cancer rising and the Moon exalted in Taurus in the 11th house.

We open the episode with some brief reflections on the solar eclipse in Leo and our experience of that now that it is over, followed by some discussion about the flat earth conspiracy theory that was discussed in episode 121, and some of the issues that raised in terms of education and certification within the astrological community.

If you want to jump forward to the forecast segment of the episode, we start that discussion at 33:43 in the audio recording.

Astrological Alignments for September of 2017

Here is the primary auspicious electional chart that we highlighted for September:

There are three more electional charts that we found for September, which we will be talking about in our private subscriber-only podcast on auspicious elections that will be released tomorrow.