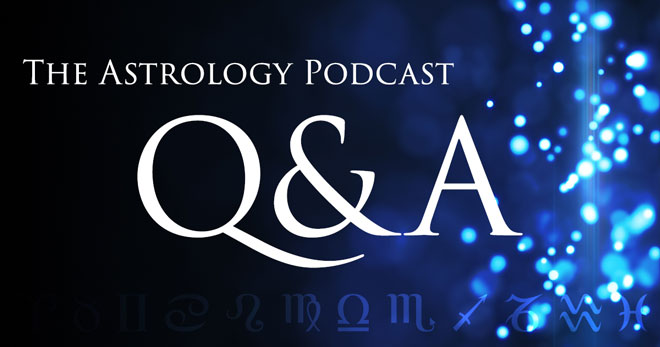 In episode 82 of the podcast Kelly Surtees and Leisa Schaim join the show in order to help answer some questions that were sent in by listeners of the podcast over the past couple of months on a variety of topics.

The questions covered topics such as the origins and rationale of the Arabic Parts, the reliability of astrology software programs, how to deal with the uncertainty surrounding which system of house division to use, issues surrounding the use of mythology as an interpretive tool in order to understand celestial bodies, constructive manifestations of planets placed in difficult houses, and more.

We had a couple of announcements at the top of the show, first about nominating The Astrology Podcast for an ISAR award, and then we did the drawing for the monthly giveaway for June, and handed out a pass to the upcoming ISAR conference in October, as well as a one year subscription to the Mountain Astrologer magazine.

You can find out more details about those announcements below, followed by the full description of questions answered during this episode, and then links to download or stream this episode of the podcast.

Nominate The Astrology Podcast for an ISAR Award

ISAR is giving out an award for the best audio-visual production at their upcoming conference in October, and there is an open call right now for nominations. The initial phase is that the top five productions that get the most nominations by the deadline on June 30 will then be voted on by the general ISAR membership later this year.

If you would like to nominate The Astrology Podcast then you should send an email to Glenn Perry at glenn@aaperry.com saying that you would like to nominate the podcast and giving them the link to it. Please CC Sam Reynolds on the email at: unlockastrology@gmail.com. If the podcast gets enough nominations in the next day then it could win an award, which would be kind of cool.

At the beginning of this episode we did the drawing and announced the winners of our monthly giveaway for patrons of the podcast.

This is one of the new benefits for patrons on the $5 and $10 tiers, as explained in this post about the giveaway on the podcast blog.

The prize for the $5 tier this month was a free one year subscription to The Mountain Astrologer magazine.

The Mountain Astrologer magazine, published every other month for nearly 30 years, is the publication that students of astrology — and professional astrologers — rely on to keep them connected to the astrological community. TMA, which also has a digital edition, covers all the bases with well-edited feature articles, a student section, detailed forecasts, and even astro-humor.

You can find TMA’s blog, subscription information, and 15 years of back issues at: www.MountainAstrologer.com

The winner of the subscription was listener Freeman Presson!

The grand prize this month for the $10 tier was a pass to the upcoming astrology conference that is being hosted by the International Society for Astrological Research.

This is going to be the biggest conference event of the year, and it is being held in Costa Mesa, California, from October 13–17, 2016. The focus of the conference is on astrological forecasting, and the tagline is “the power of forecasting meets the consequence of choice.” The conference will feature 60 speakers from around the world, speaking on six different tracks that cover timing techniques, financial markets, psychological shifts, spiritual phases, relationships, and Indian astrology. There are also going to be two presidential panels at the beginning and end of the conference, since it will take place right before the U.S. presidential election in November.

You can find out more information about the conference at www.ISARastrology.org.

The winner of the pass to the ISAR conference was listener Scotty Hudson!

Thanks to all of our sponsors that donated prizes for this month’s drawing! Be sure to check out their websites for more info about some of the prizes offered this month.

I’m in the process of getting together the prizes for next month right now, but the grand prize for the $10 tier next month has already been established, and it is going to be a free copy the popular astrology software program called Solar Fire. I’ll have more details on that soon. If you would like to be eligible to win a prize in next month’s drawing then all you have to do is sign up to become a patron of The Astrology Podcast.

Questions and Answers in This Episode

We received questions from about 14 separate people for this episode, although we were only able to get through the first seven or so, and it still took us two hours and fifteen minutes. Some people submitted multiple questions, and unfortunately due to time constraints we didn’t get to answer all of those either. Hopefully we will be able to carry over some of the questions and answer them the next time we do a Q&A episode.

In this episode we took questions from listeners Gastón García, Christina Unzicker, Marlene Stalker, Erna Ahlfors, Teodora Gales, Erica Jones, and Margarita Stoffberg. Thanks everyone for sending in your questions!

A full transcript of this episode is available: Episode 82 transcript