The Astrology of Uranus and the United States 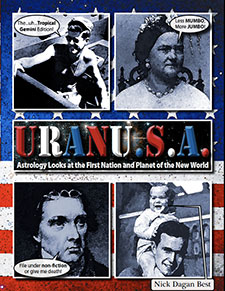 In this episode I interview astrologer Nick Dagan Best about his new book titled URANU.S.A.: Astrology Looks at the First Planet and Nation of the New World.

The book focuses on three different periods in American history when transiting Uranus was in Gemini, and shows how these were pivotal times that coincided with great changes in the country. For example, Uranus’ transit through Gemini coincided with the American Revolution, the Civil War, and World War II.

The book also covers the biographies of a number of important figures who played significant roles during each of these periods, and shows different ways in which transiting Uranus figured prominently in their natal charts at the time of the events.

The book is available for order either as an eBook or a printed book through Nick’s website:

Below you will find our show notes, and a link to download this episode of the podcast.

A full transcript of this episode is available: Episode 11 transcript