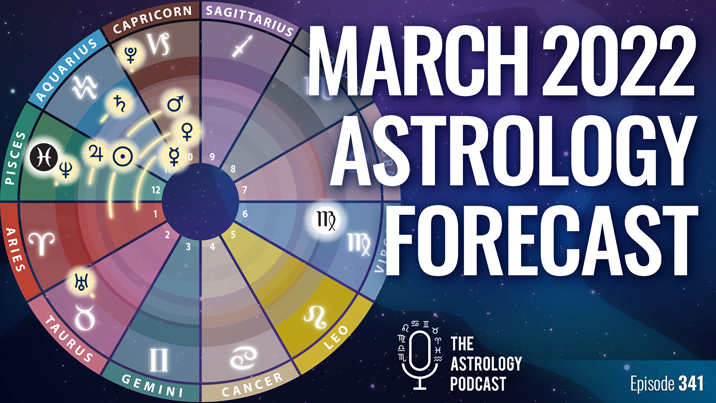 In episode 341 astrologers Chris Brennan, Austin Coppock, and special guest co-host Christopher Renstrom look ahead at the astrology of March 2022.

The astrology of March features the second of two Venus-Mars conjunctions, as well as the build up to a conjunction between Mars and Saturn in Aquarius and a Jupiter-Neptune conjunction in Pisces.

There is also a New Moon in Pisces early in the month on March 2, and a Full Moon in Virgo on March 18.

At the top of the episode we reflect on the ongoing Venus-Mars conjunction and the archetypal themes of war and peace that have become prominent recently.

You can find out more information about each astrologer on our websites:

Our sponsor this month is the Zodiac Buzzed astrology drinking card game!

Get a copy of the deck by signing up for their Kickstarter which is launching on March 3!

The most auspicious astrological date for March is:

For dates later in the year see our 2022 Year Ahead Electional Astrology Report!

Watch the video version of this episode on the astrology of March 2022:

A full transcript of this episode is available: Episode 341 transcript