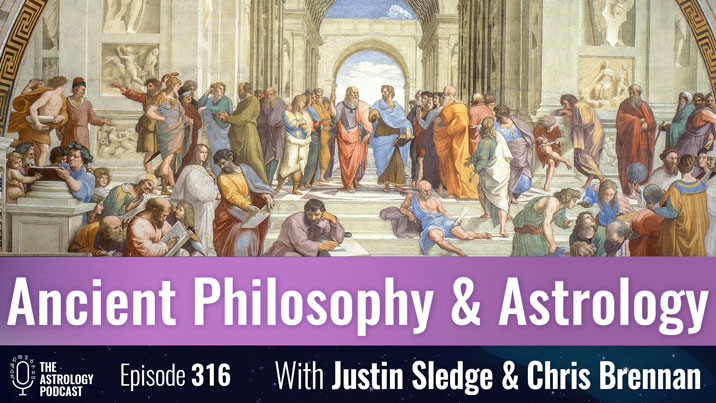 In episode 316 of the podcast Dr. Justin Sledge and Chris Brennan talk about the relationship between astrology, philosophy, and religion in the ancient world.

Our main focus is on discussing the ways in which astrology influenced some of the different philosophical and religious schools in the Greco-Roman world, from the Hellenistic era through the time of the Roman Empire and into the early Medieval period.

We also discuss questions like what was the philosophy underlying the practice of astrology in antiquity? To what extent did ancient astrologers articulate a personal philosophy? What was the purpose of practicing astrology in the ancient world?

During the course of the discussion we ended up touching on topics such as what is the mechanism underlying astrology (whether it works through signs or causes), issues surrounding fate, free-will, determinism, as well as the role of various schools such as Platonism, Aristotelianism, Stoicism, Hermeticism, Gnosticism, Christianity, and more.

This was originally an interview for Justin’s Esoterica YouTube channel, where he interviewed Chris based on his book Hellenistic Astrology: The Study of Fate and Fortune, but afterward we agreed to release the discussion as an episode of The Astrology Podcast simultaneously because it ended up being such a fantastic discussion that is very relevant to both of our audiences.

Find many more videos on ancient philosophy and mysticism on Justin’s channel:

Watch the video version of this episode on ancient philosophy and astrology:

A full transcript of this episode is available: Episode 316 transcript