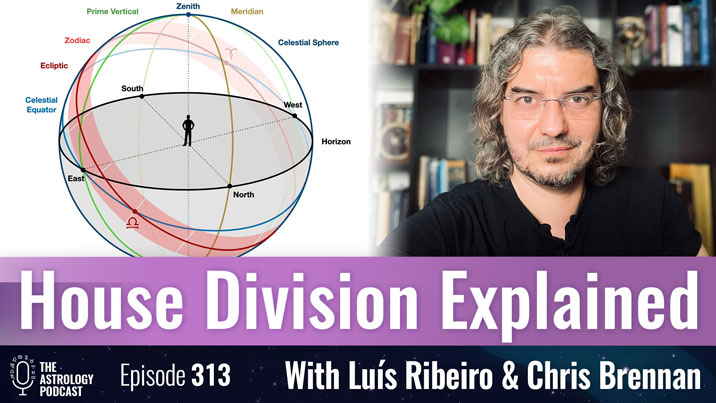 In episode 313 astrologer Luís Ribeiro joins the show to explain the astronomy and mathematics underlying the calculation of the different forms of house division in western astrology.

We begin with a historical timeline showing when some of the different forms of house division were introduced, who the earliest sources are that mention them, and the time periods in which they reached the peak of their popularity.

Then we go into a detailed breakdown of the astronomy and mathematics underlying how some of the most popular forms of house division are calculated.

We focus in particular on the rationale for whole sign houses, equal houses, Porphyry houses, Alcabitius, Campanus, Regiomantanus, and Placidus.

Our goal was not necessarily to advocate for any one system or talk about which was better to use in practice, but instead to help astrologers understand how the cusps are divided according to each approach.

Towards the end of the episode we have a section talking about an astronomical instrument called an astrolabe, and showing how medieval astrologers used it in order to calculate the Ascendant, Midheaven, and other intermediate house cusps.

For more info about Luis and his work visit:

This episode is available in both audio and video versions below, although we would encourage you to watch the video version because there are a lot of visuals.

Watch the video version of this episode on house division in astrology:

A full transcript of this episode is available: Episode 313 transcript