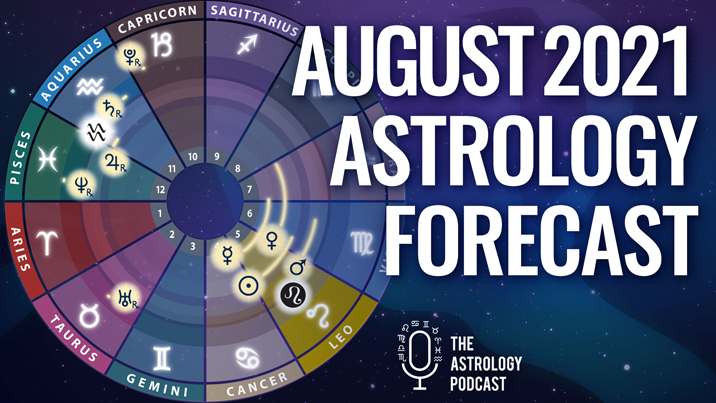 In episode 312 we look at the astrological forecast for August of 2021, with astrologers Austin Coppock, Chris Brennan, and special guest co-host Chani Nicholas.

August begins with Jupiter having just retrograded back into Aquarius, which it had left when it moved into Pisces on May 13, returning for some unfinished business from earlier in the year.

August also features Uranus stationing direct in Taurus, and the second of two Full Moon’s in Aquarius, with the first having occurred in late July.

Chani is filling in this month for Kelly, and she is the author of the book You Were Born for This: Astrology for Radical Self-Acceptance, as well as the creator of the CHANI astrology app for iPhone.

Our sponsor this month is Sphere + Sundry, which makes talismanic magical materia:

Their Jupiter in Pisces talisman series was just recently announced!

Our other sponsor is the Fresh Voices in Astrology Summit, which is an online astrology conference happening August 28-29, 2021:

This event is free to attend live, so take advantage of it to see some great talks!

The most auspicious astrological date we could find in August is:

There are several other charts for August that are available in our subscription electional astrology podcast.

Watch the Video Version of Our August Astrology Overview

Here is the video version of our August astrology forecast on YouTube:

A full transcript of this episode is available: Episode 312 transcript