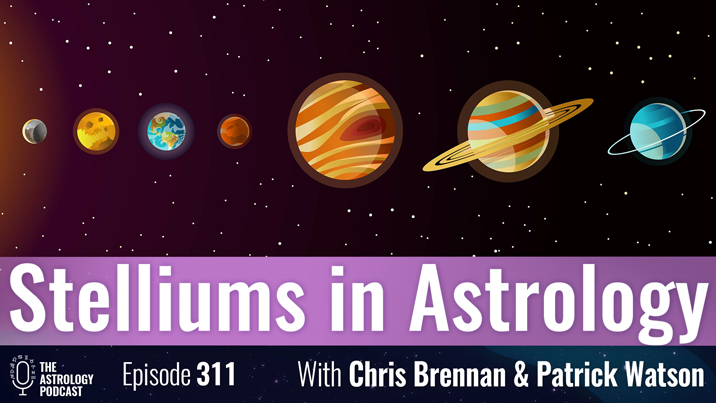 In episode 311 astrologers Chris Brennan and Patrick Watson discuss the concept of stelliums in astrology, and what it means to have 3 or 4 or more planets in the same sign or house in your birth chart.

In the first part of the show we try to address some debates and questions about stelliums, such as how many planets need to be involved in order for you to have a stellium, what planets or points should be considered when calculating a stellium, and what is the plural form of the word stellium?

After that we start looking at a bunch of example charts, in order to demonstrate what it looks like in real life when a person has a stellium of planets in a specific sign of the zodiac or in one of the twelve houses.

Later we also briefly touch on the concept of stelliums in mundane astrology, such as the Capricorn stellium that happened in 2020, or other stelliums that have coincided with specific events in the past.

This episode is available in both audio and video versions below, although it is probably best to watch the video version if you can, since we go through a lot of chart examples.

Watch the Video Version of This Episode on Stelliums

Here is the video version of this episode on stelliums on our YouTube channel:

A full transcript of this episode is available: Episode 311 transcript