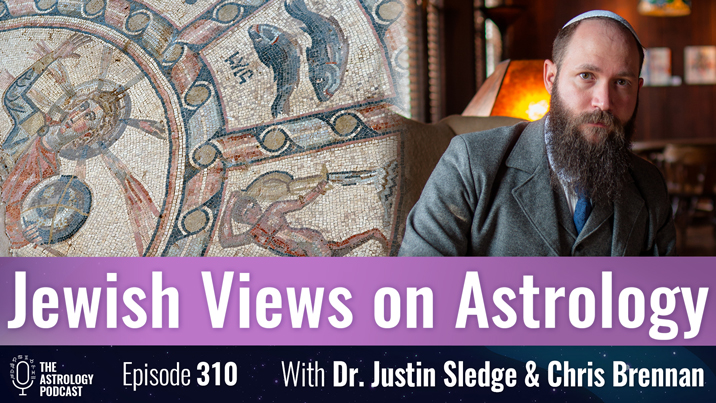 Episode 310 features an interview with Dr. Justin Sledge about ancient Jewish views on astrology, and the complicated relationship between astrology and early Judaism.

Our starting point is the geographical location of the Jewish people being situated between Mesopotamia and Egypt, which were two cultures that had very old traditions of astrology dating back to 2000 BCE.

We then talk about the role that monotheism played in creating some tensions with early forms of astrology, which were often practiced in a polytheistic context.

Later we get into some positive views on astrology held by Jews during the time of the Roman Empire, including the Essenes at Qumran, and a text on Lots and zodiacal releasing attributed to Abraham that was drawn on by Vettius Valens and Firmicus Maternus.

We also discuss some of the early zodiac mosaics that feature prominently in synagogues in the first seven centuries CE.

Eventually we touch on some of the earliest Jewish astrologers who are known by name and who made major contributions to astrology, such as Masha’allah and Abraham ibn Ezra.

Justin is a professor of philosophy and religion who focuses on the western esoteric tradition, and the host of the Esoterica Youtube channel:

Watch the video version of this episode on Jewish views on astrology:

A full transcript of this episode is available: Episode 310 transcript