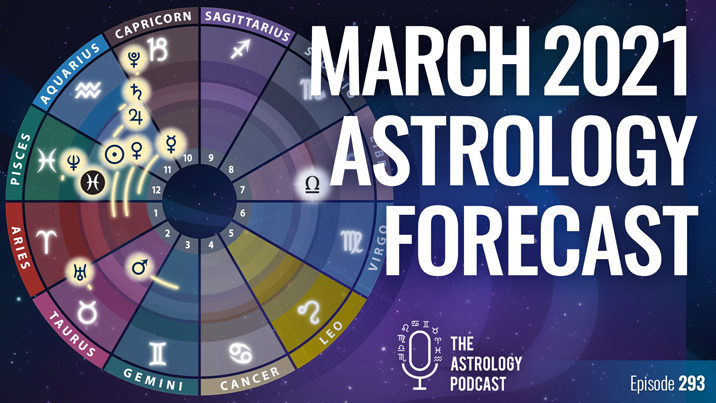 In episode 293 astrologers Kelly Surtees, Austin Coppock, and Chris Brennan look at the astrology forecast for March of 2021.

March features the end of the sign-based square between Mars and Saturn that began way back in mid-2020, plus a shift of planets into mutable signs, and the beginning of a new Venus synodic cycle.

Towards the end of the episode we talk about a few miscellaneous topics that came up on the podcast this month, such as the meanings of the north and south nodes, the different definitions of the void of course Moon, and whether astrology is a form of divination like tarot.

Our sponsor this month is Archetypal Explorer, which offers a visual astrology program for the savvy enthusiast:

Here are links to some of our current offerings this month:

Here are the planetary alignments for March:

The most auspicious astrological date we could find in March is:

There are a few other charts for March that are available in our private subscriber-only electional astrology podcast.

You can watch the video version of our March astrology forecast here: