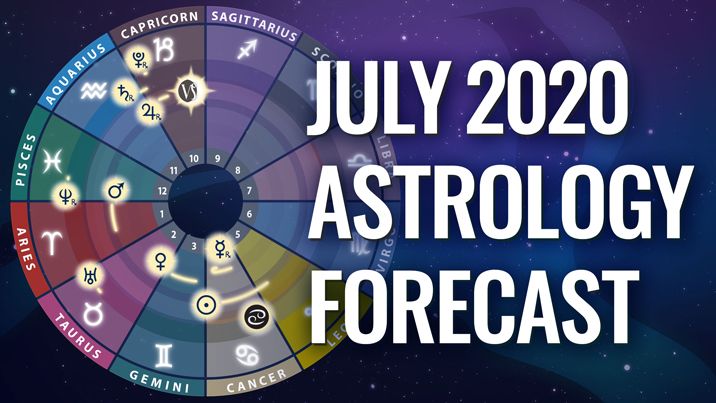 Episode 261 features astrologers Kelly Surtees, Austin Coppock, and Chris Brennan giving an overview of the astrological forecast for July of 2020.

The astrology of July features Mars starting its long transit through Aries, Saturn moving back into Capricorn, a lunar eclipse in Capricorn, and Mercury squaring Mars most of the month.

We begin the episode by reviewing the astrology of the second quarter of the year, focusing on Saturn’s ingress into Aquarius where it began squaring Uranus, which should give us some preview of what Saturn’s return to Aquarius will look like in December and after.

Two of the main transits of July are Saturn retrograding back into Capricorn and Mars beginning its long six month journey through Aries, which in many ways brings us back to some of the same themes and energies that were present in the first quarter of the year.

Tensions are heightened in July though, as a side effect of the second half of the Mercury retrograde period is that Mercury will be squaring Mars pretty closely for most of the month.

At the same time we begin the month with the second of three Jupiter-Pluto conjunctions in Capricorn, as well as the final lunar eclipse taking place in Capricorn.

Below you will find links to news and announcements, the show notes, and then links to stream or download this episode of the podcast.

Our featured electional chart for this month is a Sun in Leo election:

We also presented a few other elections for July on our private subscriber-only podcast on auspicious elections.

We also recently discounted our full year-ahead electional astrology report for 2020, which highlights some better charts later in the year.