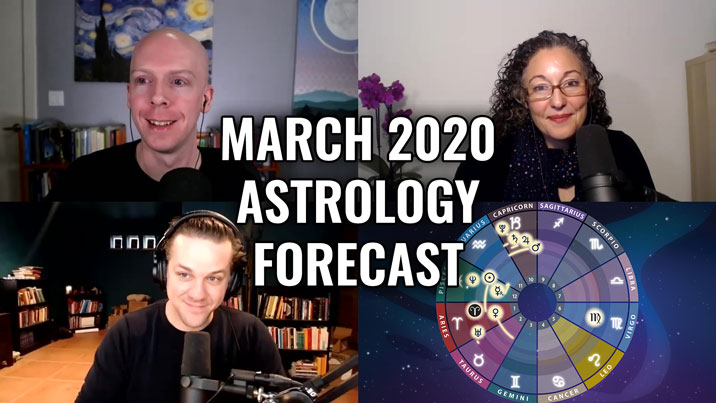 The astrology of March features the tail end of the Mercury retrograde in Pisces and Aquarius, a Full Moon in Virgo, New Moon in Aries, and then ends with Saturn and Mars moving into Aquarius and forming a conjunction.

We spend the first hour and a half of the episode on the astrology forecast for March, and then in the final hour we transition into talking about a recent discussion about the concept of essential dignity in the astrological community.

This episode is available in both audio and video versions at the bottom of this page.

For early access to new episodes and other bonus content, consider becoming a patron of The Astrology Podcast on Patreon.

Here are links to some of the stuff mentioned in this episode:

The auspicious election for March that was chosen by Leisa Schaim is set for:

There are a three more electional charts that we found for March, which are available in our private subscriber-only podcast on auspicious elections that was just released a few days ago.

We also have a full year-ahead electional astrology report for 2020, which highlights one auspicious electional chart for each month this year.

Watch the Video Version of Our March Astrology Forecast