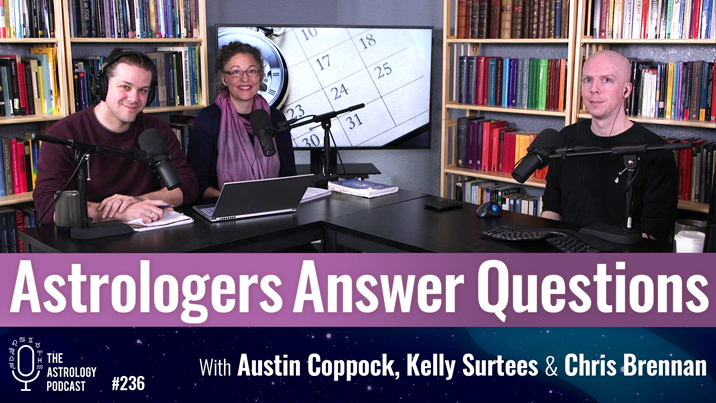 In episode 236 astrologers Kelly Surtees, Austin Coppock, and Chris Brennan got together in-person to answer some questions about astrology that were sent in by listeners of the show.

This was the last of the in-studio recordings that we did in Denver towards the end of Austin and Kelly’s trip here in late November.

The astrology questions we answered were sent in through Twitter, as well as our private Facebook group, which is available to patrons of The Astrology Podcast.

Thanks everyone who sent in questions!

🪐Chris and Leisa just released their 2020 Electional Astrology Report! We picked out one auspicious electional chart for each of the next 12 months, including one for the very rare Jupiter-Saturn conjunction in Aquarius.

🪐The Astrology Podcast 2020 Poster Bundle is now available! It includes the Planetary Alignments Calendar, which is part of the artwork we display in the forecast episodes, allowing you to track ingresses, lunations, and retrogrades for the entire year at a glance.

Astrology Questions Discussed in This Episode

Here are some of the questions we answered in this episode:

What was the role of transits in ancient astrology? And how do each of you employ transits in your current practise, in contrast to other predictive techniques?

What do you think your role is as a group of astrologers who are now a tier older than the youngest generation of professional astrologers? Like, what is the role of mentorship and role modeling in the community, and what are your favorite ways to enact that? What would you like to see more of?

What are y’all’s hopes/fears for the coming year(s) re: astrology? are there certain discussions or conversations you can see needing to happen within the community as a whole? are there any upcoming configurations that bode positively/negatively for the rise of astrology?

From Martina Segovia on the Astrology Podcast Patreon Facebook group

I’m looking to start a local IRL astrology group; any tips to help it be successful?

How do you maintain and honor your boundaries/the privacy of others when friends (or acquaintances/coworkers/whomever) ask you about their charts or about themselves when they learn you’re an astrologer?

Do you charge your regular fees from relatives also? Is your approach different from as compared to unknown clients??

I’m curious how astrologers handle doing readings for their spouses/significant others, and where everyone stands on the ethics of that, etc. I’m sure astrologers don’t want a counseling relationship, but at the same time, still want their spouse to be aware of certain placements.

This is a whole pandora’s box you may want to leave closed, but i want to hear more about how Austin has incorporated his jyotish studies into his western approach and the utility of looking at someone’s chart in both zodiacs and what can be gained from that /how to reconcile

Do you have other astrologers read your charts for you? How often do you look at your own chart? What are some good questions to ask when having your first reading?

If you have the malefic contrary to sect in the sign of its rulership or exaltation, would you interpret that as having more power to cause trouble or would you say that it’s less troublesome because of its dignity?

I have a nodal return coming up. I’m having a hard time finding info about it. I’d love to know what one should expect during a nodal return.

How do you communicate really extremely nasty aspects to a client?

If you could trade placements with each other from your charts, which ones would you take on, and why?

Here is the video version of our question and answer episode:

A full transcript of this episode is available: Episode 236 transcript

Answering Astrology Questions with Kelly Surtees, Austin Coppock, and Chris BrennanListen to the Audio Version of This Episode