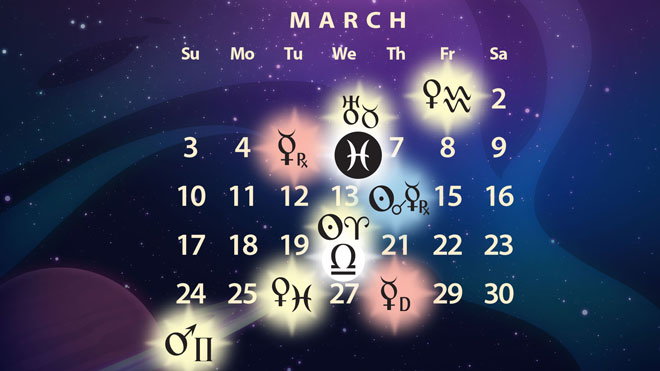 Episode 195 features astrologers Kelly Surtees, Austin Coppock, and Chris Brennan talking about the astrological forecast for the month of March 2019.

The astrology of March includes Mercury going retrograde in Pisces and eventually stationing direct conjunct Neptune, as well as Uranus making its final ingress into Taurus where it will stay for several years.

At the top of the show we spend about an hour following up on the celestial lobster crisis from last month’s forecast, and review some of the other topics covered in the podcast this month: zodiacal releasing, vimshottari dashas, and reincarnation in astrology.

This episode is available in both audio and video versions, and links to both are below.

The Astrology of March

Here are some of the major astrological alignments for March:

There are a few more electional charts that we found for February, which are available in our private subscriber-only podcast on auspicious elections that was released today.

Watch the Video Version of Our March Forecast