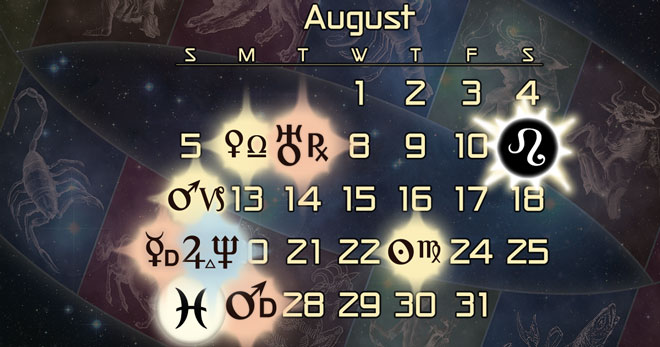 In episode 166 astrologers Kelly Surtees and Austin Coppock join the show to talk about the astrological forecast for August of 2018.

August features Uranus stationing retrograde for the first time in Taurus, the last of a series of solar eclipses in Leo that started last year, Mars retrograding back into Capricorn and then stationing direct, and more.

At the top of the show we discuss the process of writing horoscopes, and some of the challenges associated with it, after Chris’ recent foray into making monthly horoscopes.

Below you will find the show notes, followed by links to download the recording of this episode.

News and announcement from the top of the show:

Our sponsor this month was Sphere + Sundry, which produces materials for self-care and magic on rare and potent astrological elections.

They create products using sympathetic herbs, metals, gems, and oils, and this month we gave away three sets from their new Asclepius series.

Here are some of the major transits that we covered for August:

There are three more electional charts that we found for August, which are available in our private subscriber-only podcast on auspicious elections that was released today.

Here is the video version of the August 2018 astrology forecast: