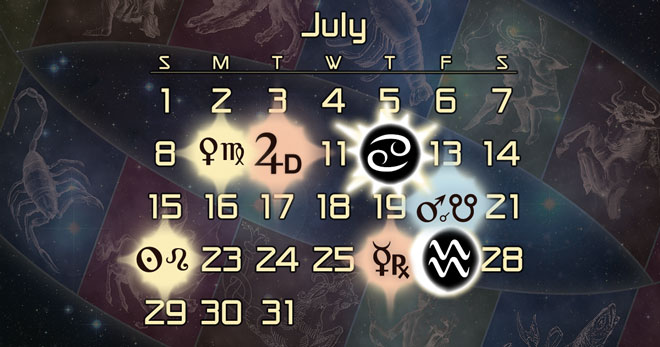 In episode 162 of the podcast astrologers Kelly Surtees and Austin Coppock join the show to talk about the astrological forecast for July of 2018.

Our main focus this month is a tense lunar eclipse that occurs towards the end of the month in Aquarius, which is closely conjunct Mars and square Uranus.

We also discuss a Mercury retrograde in Leo, a partial solar eclipse in Cancer, and Jupiter stationing direct in Scorpio.

At the top of the show Chris discusses the possibility of writing a Sun-sign column, and some of the pros and cons that go along with that.

Jo Gleason recently wrote a thread on twitter saying that every astrologer should write horoscopes at some point in their life.

Here are the major astrological alignments for July:

There are three more electional charts that we found for July, which are available in our private subscriber-only podcast on auspicious elections that was released yesterday.