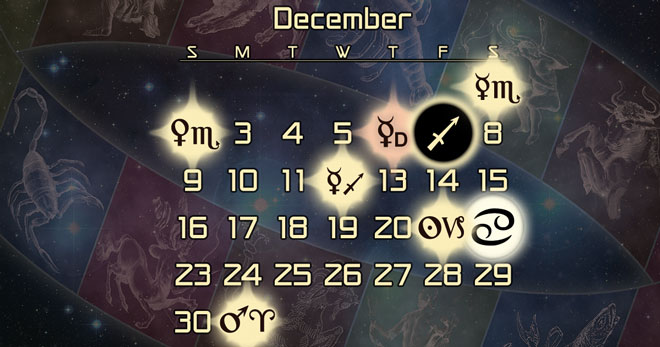 In episode 183 of the podcast astrologers Chris Brennan, Kelly Surtees, and Austin Coppock discuss the astrological forecast for December of 2018, and the end of a year that has been filled with a seemingly endless barrage of retrograde planets.

This episode was recorded earlier in November than usual, and it opens with Austin telling a humorous story about some recent Mercury retrograde snafus he ran into while trying to get a new passport, so that he could fly to Australia for the “So Below” event with Gordon White of the Rune Soup podcast (Austin ended up making it).

Early in the episode we also discuss the fine balance between taking astrology seriously but still being able to have some degree of levity about it, or a live and let live attitude with other approaches and people whose views may differ from your own.

Eventually we get to the forecast for December, which features Mercury stationing direct in Scorpio, and lunations in Sagittarius and Cancer.

Later in the episode we highlight one auspicious electional chart this month, a Jupiter in Sagittarius election, which can be used for beginning a new venture or undertaking.

Below you will find the show notes, followed by links to download the recording of this episode at the bottom of the page, which is available in both audio and video versions.

Major Astrological Alignments for December of 2018

Here are some of the major transits for December that we cover in this episode:

There are a few more electional charts that we found for December, which are available in our private subscriber-only podcast on auspicious elections that was released today.

Watch the Video Version of the December Forecast

Here is the video version of the December 2018 astrology forecast:

Listen to the Audio Version of the December Forecast Episode