The Astrology of Bitcoin 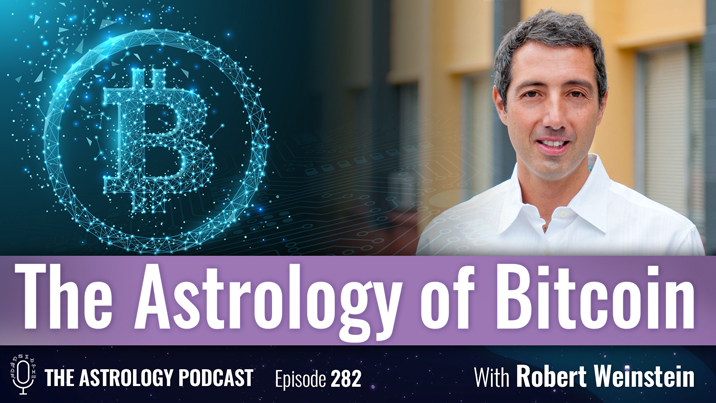 Episode 282 features an interview with astrologer Robert Weinstein about his work using astrology to study fluctuations in the value of the cryptocurrency called Bitcoin.

Robert wrote an article in The Mountain Astrologer magazine last year on the astrology of Bitcoin, and originally approached me last summer about doing an episode on the topic, although I wasn’t quite ready at that point.

My interest in the topic was renewed recently though when the value of Bitcoin hit a new all time high on November 30, which happened to coincide with a lunar eclipse in Gemini that we talked about in our astrology forecast last month.

So we decided to sit down yesterday and record a sweeping three-hour discussion on the connections between astrology and Bitcoin, and some of the studies Robert has done on it.

We spend a large part of the first hour just talking about what Bitcoin is and how it originated, in order to introduce it to a beginner audience, and then in the second and third hours we get more into the birth chart of Bitcoin, and review some past instances where price fluctuations have coincided with transits to the Bitcoin chart.

Eventually we also talk a little bit about the future, and some of the changes expected in currencies with Uranus moving through Taurus, as well as some of the long term transits for the chart of Bitcoin in general.

For more information about Robert check out his website:

Here are some timestamps for different topics we talked about:

You can watch the video version of this episode on the astrology of Bitcoin here:

A full transcript of this episode is available: Episode 282 transcript